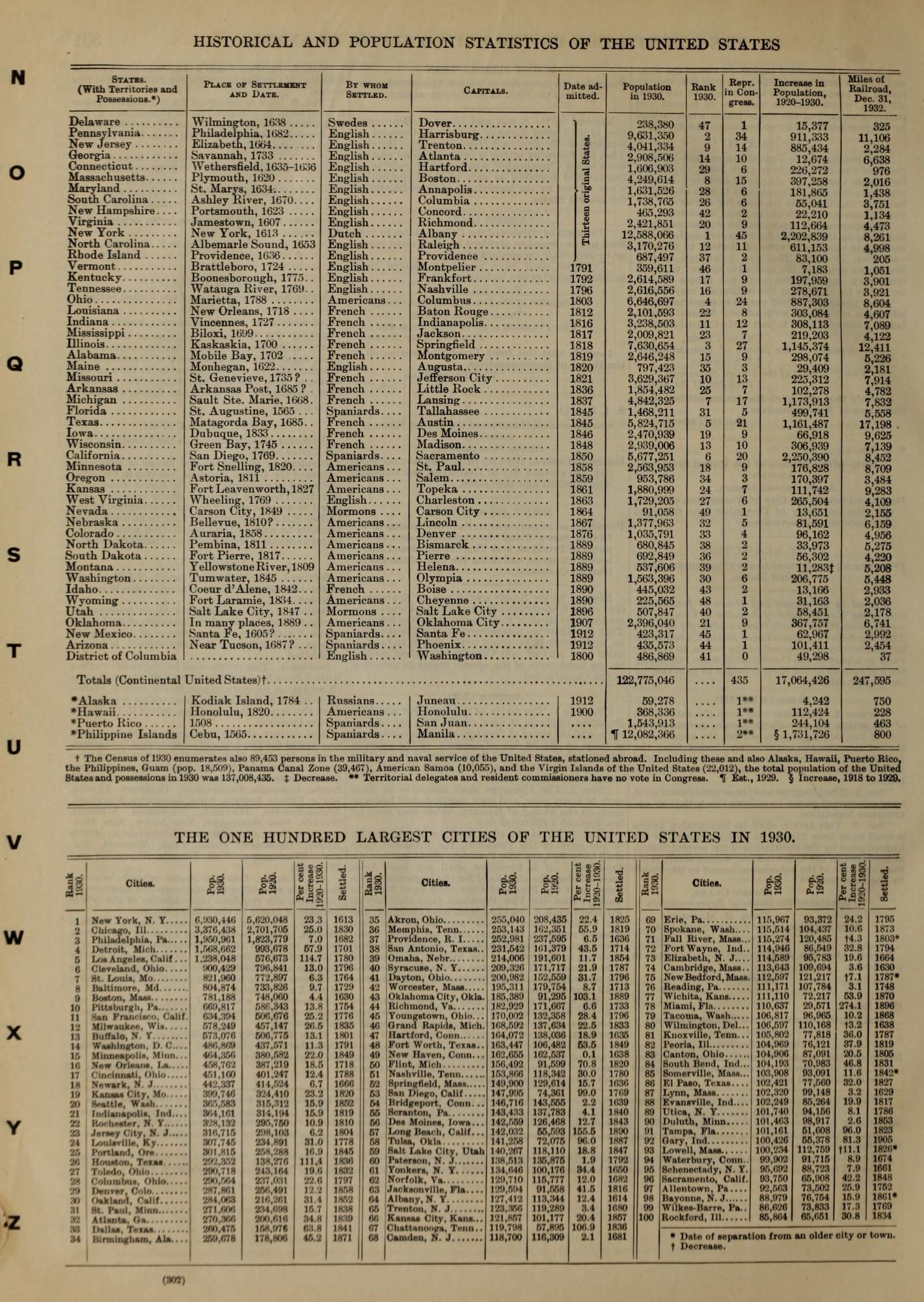 Shall we expect some transatlantic military giant to step the ocean and crush us at a blow? Never! All the armies of Europe, Asia, and Africa combined, with all the treasure of the earth (our own excepted) in their military chest, with a Bonaparte for a commander, could not by force take a drink from the Ohio or make a track on the Blue Ridge in a trial of a thousand years. At what point then is the approach of danger to be expected? I answer. If it ever reach us it must spring up amongst us; it cannot come from abroad. If destruction be our lot we must ourselves be its author and finisher. As a nation of freemen we must live through all time or die by suicide. Abraham Lincoln

No doubt the "run of the continent" has improved the fiber of the American people. Of course the well established and the intellectuals had no motive to seek the West; but in energy and venturesomeness those who sought the frontier were superior to the average of those in their class who stayed behind. It was the pike rather than the carp that found their way out of the pool.

Now, in the main, those who pushed through the open door of opportunity left more children than their fellows who did not. Often themselves members of large families, they had fecundity, as it were, in the blood. With land abundant and the outlook encouraging, they married earlier. In the narrow life of the young West, love and family were stronger interests than in the older society; hence all married. Thanks to cheap living and to the need of helpers, the big family was welcomed. Living by agriculture, the West knew little of cities, manufactures, social rivalry, luxury, and a serving class, all foes of rapid multiplication.

In 1802, [François André] Michaux found the families of the Ohio settlers "always very numerous," and of Kentucky he wrote: "There are few houses which contain less than four or five children." Traveling in the Ohio Valley in 1807, [Fortescue] Cumings observed: "Throughout this whole country, whenever you see a cabin you see a swarm of children"; and [John] Woods wrote in 1819: "The first thing that strikes a traveler on the Ohio is the immense number of children."

But there is solider proof of frontier prolificacy. The census of 1830 showed the proportion of children under five years in the States west of the Alleghanies to be a third to a half greater than in the seaboard region. The proportion of children to women between fifteen and fifty was from fifty to a hundred percent greater. In 1840, children were forty percent more numerous among the Yankees of the Western Reserve than among their kinsmen in Connecticut. The next half-century took the edge off the fecundity of the people of the Ohio Valley; but their sons and daughters who had pushed on into Kansas, Nebraska, and Minnesota, showed families a fifth larger. In 1900, the people of the agricultural frontier - Texas, Oklahoma, and the Dakotas - had a proportion of children larger by twenty-eight percent than that of the population between Pittsburgh and Omaha.

If the frontier drew from the seaboard population a certain element, and let it multiply more freely than it would have multiplied at home, the frontier must have made that element more plentiful in the American people, taken as a whole; and this, indeed, appears to be what actually occurred. No one ventures to assert that the Americans are differentiated from the original immigrating stocks by superiority in any form of talent or in any kind of sensibility; but they impress all foreign observers with their high endowment of energy, tenacity of purpose, and willingness to take risks, and these are just the qualities that are fostered and made more abundant by the wilderness.

I do not maintain that life in America has added any new trait to the descendants of transplanted Europeans, nor has it filled them all with the pioneer virtues. What I do mean is that, owing to the progressive peopling of the fertile wilderness, certain valuable strains that once were represented in, say, a sixth of the population, might come to be represented in a quarter of it; and the timid, inert sort might shrivel from a fifth of the population to a tenth. Such a shifting in the numerical strength of types would account both for the large contingent of the forceful in the normal American community, and for the prevalence of the ruthless, high-pressure, get-there-at-any-cost spirit which leaves in its wake achievement, prosperity, neurasthenia. Bright's disease, heart failure, and shattered moral standards.

Very likely the Irish exodus is a closed chapter of history. Ireland's population has been shrinking for sixty years, and she has now fewer inhabitants than the State of Ohio. People are leaving the land of heather twice as fast as they are abandoning the land of the shamrock. The early marriage and blind prolificacy that had overpopulated the land until half the people lived on potatoes, and two-fifths dwelt in one-room mud cabins, are gone forever, and Ireland has now one of the lowest birth-rates in Europe.

Gradually the people are again coming to own the ground under their feet; native industries and native arts are reviving, and a wonderful rural cooperative movement is in full swing. The long night of misgovernment, ignorance, and superfecundity seems over, the star of home rule is high, and the day may soon come when these home-loving people will not need to seek their bread under strange skies.

During its earlier period, Irish immigration brought in a desirable class, which assimilated readily. Later, the enormous assisted immigration that followed the famine of 1846-48 brought in many of an inferior type, who huddled helplessly in the poorer quarters of our cities and became men of the spade and the hod. After the crisis was past, there again came a type that was superior to those who remained behind. Of course the acquiescent property-owning class never emigrated, and those rising in trade or in the professions rarely came unless they had fallen into trouble through their patriotism. But of the common people there is evidence that the more capable part leaked away to America.

Owing to this exodus of the young and energetic, Ireland has become the country of old men and old women. An eighth of her people are more than sixty-five years old as against an eleventh in England. In half a century the proportion of lunatics and idiots in the population of Ireland rose from one in 657 to one in 178.

It will probably be asked, Why not retain and incorporate the blacks into the state, and thus save the expence of supplying by importation of white settlers, the vacancies they will leave? Deep rooted prejudices entertained by the whites; ten thousand recollections, by the blacks, of the injuries they have sustained; new provocations; the real distinctions which nature has made; and many other circumstances will divide us into parties, and produce convulsions, which will probably never end but in the extermination of the one or the other race.—To these objections, which are political, may be added others, which are physical and moral. The first difference which strikes us is that of colour.

And is this difference of no importance? Is it not the foundation of a greater or less share of beauty in the two races? Are not the fine mixtures of red and white, the expressions of every passion by greater or less suffusions of colour in the one, preferable to that eternal monotony, which reigns in the countenances, that immovable veil of black which covers all the emotions of the other race? Add to these, flowing hair, a more elegant symmetry of form, their own judgment in favour of the whites, declared by their preference of them as uniformly as is the preference of the Oranootan [orangutan] for the black woman over those of his own species. The circumstance of superior beauty, is thought worthy attention in the propagation of our horses, dogs, and other domestic animals; why not in that of man?

Thomas Jefferson. Notes on the State of Virginia, 1785

To our reproach it must be said, that though for a century and a half we have had under our eyes the races of black and of red men, they have never yet been viewed by us as subjects of natural history. I advance it, therefore, as a suspicion only, that the blacks, whether originally a distinct race, or made distinct by time and circumstances, are inferior to the whites in the endowments both of body and mind. It is not against experience to suppose that different species of the same genus, or varieties of the same species, may possess different qualifications. Will not a lover of natural history then, one who views the gradations in all the races of animals with the eye of philosophy, excuse an effort to keep those in the department of man as distinct as nature has formed them?

This unfortunate difference of colour, and perhaps of faculty, is a powerful obstacle to the emancipation of these people. Many of their advocates, while they wish to vindicate the liberty of human nature, are anxious also to preserve its dignity and beauty. Some of these, embarrassed by the question, "What further is to be done with them?" join themselves in opposition with those who are actuated by sordid avarice only. Among the Romans emancipation required but one effort. The slave, when made free, might mix with, without staining the blood of his master. But with us a second is necessary, unknown to history. When freed, he is to be removed beyond the reach of mixture.

Thomas Jefferson. Notes on the State of Virginia, 1785

Some latter-day writers deplore the enormous immigration to our shores as making us a heterogeneous instead of a homogeneous people; but as a matter of fact we are less heterogeneous at the present day than we were at the outbreak of the Revolution. Our blood was as much mixed a century ago as it is now. No State now has a smaller proportion of English blood than New York or Pennsylvania had in 1775. Even in New England, where the English stock was purest, there was a certain French and Irish mixture; in Virginia there were Germans in addition. In the other colonies, taken as a whole, it is not probable that much over half of the blood was English; Dutch, French, German, and Gaelic communities abounded.

But all were being rapidly fused into one people. As the Celt of Cornwall and the Saxon of Wessex are now alike Englishmen, so in 1775 Hollander and Huguenot, whether in New York or South Carolina, had become Americans, undistinguishable from the New Englanders and Virginians, the descendants of the men who followed Cromwell or charged behind Rupert.